Heartthrob Robert Pattinson is most famous for his role as vampire Edward Cullen in the Twilight Series. But who is the real Rob - also known as Rpattz, R-Pattz or Spunk Ransom? I have studied his hands (as well as his face and gestures) and this article is the result of my analysis.

In 2008, Planet Hollywood decided to take Rob’s prints in order to create digital hand prints. Interestingly, while the prints are far from being detailed, I was able to tell a few things from them.

The mount of Luna, at the bottom of the hand, is relatively large on the left hand and huge on his right hand (his active hand). This is confirmed by various photos. It indicates a very fertile imagination as well as a craving for constant sensual gratification. He may have a tendency to escape into a fantasy world (a vampire world? Nah...) Based on the spacing of the fingers, I can also tell that, at the time of the print-taking, Rob was feeling a bit inhibited.

The size of his fingers reveals a balanced individual. They are neither long nor short - referring to balance between thinking and action - and the length of the ring finger is equal to the index finger – meaning his strong desire to shine and share doesn’t overshadow his sense of purpose and personal vision. In addition, his long thumb shows his ability to control his environment.

Talking about his thumb, did you notice how flexible it? Actually, not only the thumb, but also the whole hand! Robert Pattison is very flexible and spontaneous. He wants to try everything and may take on more than he can handle. He likes to agree with everyone and has a very hard time saying “no!” It is therefore difficult to know what he really thinks.

If you have ever seen Rob being interviewed, you know that he tends to fidget a lot, touching his hair and his face. This is caused by his fan-shaped fingernails. On one side, he has a desire to share and accomplish, but on the other, he feels a nervous resistance to carry out his actions peacefully. According to Stephanie Meyer, author of the Twilight Series, vampires are able to be still for hours, so Rob is definitely not a vampire!

Let’s take a look at the lines that can be seen on photos of Rob’s hands.

On both hands, he has a very long heart line crossing the whole hand, which denotes a very idealistic view of love, with another branch reaching between the index and the middle finger, allowing him to blend idealism with reason. This formation suggests a potentially successful love life!

On both hands again, the head line is very long and well-shaped: Rob embraces the prevailing world view without being limited by it, i.e. he can be extremely successful, appreciate his success but not depend so much on it.

The head line and life line, which are joined at the origin, show a strong influence of his family during his childhood. As a child, Rob was probably prone to self-questioning and had a very sensitive nature. Around 18-20, he discovered a new sense of freedom.

Rob’s forehead indicates different interests in life with strong mental abilities, including good memory recall.
His eyebrows show deep and heavy thinking, which is confirmed by his head line. They also reveal he is a friendly, spontaneous talker who speaks his mind quickly
According to his eyes, he values his private life as much as his public life, which I find surprising for an actor.
His nose - just like his hands - indicates he is not necessarily interested in material things. He likes the money but he loves even more what he is doing.
His mouth shows his ability to convince others. (Yes, Rob, we really thought you were Edward Cullen!)
His chin suggests his perseverance and his ability to get the job done. He won’t let his emotions get in the way of his work.
His square jaws denote a talent to handle commitment, be it a cause, a job or a spouse.
His ears imply he is highly intuitive, and the difference between his right ear and his left means that he may have a tendency to be slightly non-conformist in his public life, however he is more traditional in his private life.

You may be speculating why Robert Pattinson often runs his fingers through his hair. People do it when they are unsure of what to say. During an interview, Rob touches his hair just before he starts answering a question that puzzles him. You will notice that he does it less often now that he is a more experienced star!

And finally, a few years ago, everyone was wondering about Robert Pattinson's relationship with his Twilight co-star Kristen Stewart: was it true? By her body language, Kristen gave it all away!

On the two photos below, Kristen’s hand is resting on Rob’s torso. This is a typical subconscious gesture that shouts: “Stay away from him. He is mine!” (Of course, he is no longer hers now... Sigh!) 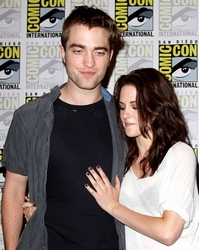 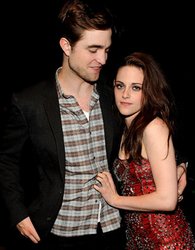 Kristen's gesture means "He is mine!"